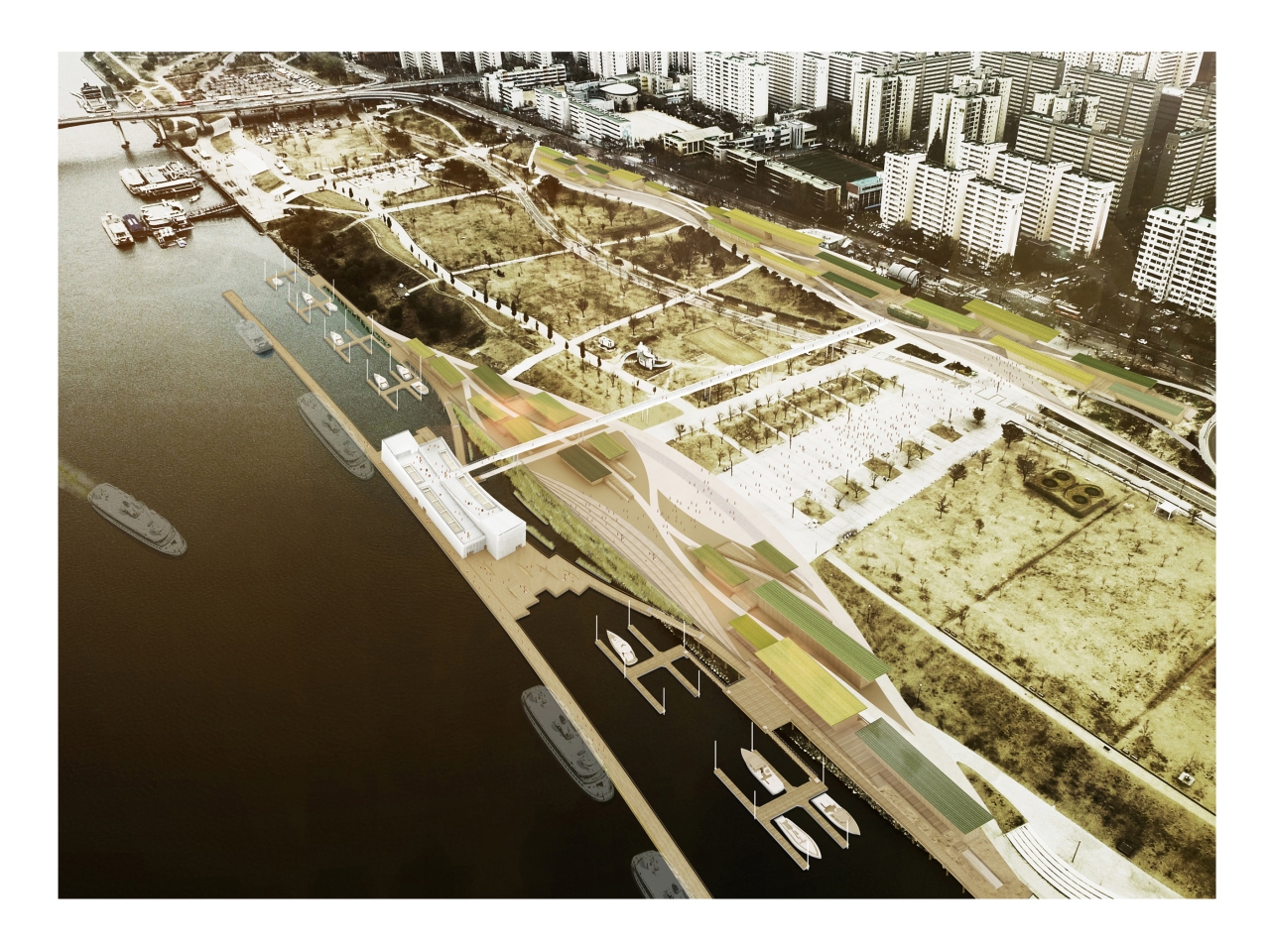 Around Yeoui-Naru Site, a variety of  cultural programs and ecological parks have already formed cultural network. In addition to the networking advantages, metro line 5 and 9 are passing through and three bridges are connected to the site in terms of accessibility. In other words, the site itself has a great potential to become a trigger of the expanding the existing cultural network, in connection with the large scale of urban fabric.

Yeoui-Naru Site will be recreated into the lively space by recovery of riverside living space, water transportation space, riverside event space and ecological space that have been faded away.

As a first step, the existing riverside area was extended onto the water surface with using floating structure and original park paths are continued to the water space.  During the shaping process, adapting to riverside’s topography & Inspiration from water flow was a modest strategy in a way of respecting the context.

Yeoui-Naru Ferry Terminal site has a strong geographical character as it is located on the water surface. Based on the advantage, the terminal site becomes an attractive cultural meeting point by bringing various public projects such as cultural performances, exhibitions, traditional markets and so on. Also, visitors who visit the existing Yeoui-Naru park next to the site are already strong candidates for experiencing the site.

Besides creating the public platform, another issue was how to offer a space for experiencing nature. By creating a gap between the floating site and riverside, a part of Yeoui-Naru water nature is preserved and the nature observing space where users can observe and rest is created.

Appearance from inspiration from local nature

The facade design was strongly inspired by Han-River field of reeds. The beauty of the gentle movements and decent colors have formed the riverside landscape. Thus, an array of slender vertical aluminum louvers have been proposed and each louver has free rotation to achieve the gentle movements as well as daylighting controls. As a result, the appearance of the ferry terminal change constantly and naturally by different climates and reflection range of daylight. Also, the array of louvers was the result of agony to express the ferry terminal as a sculptural object, and at the same time to see the Han River views from the inner space.

Ferry Terminal Programs as a balanced mixture of terminal, retail and cultural programs

Programs were placed in the central space considering the flow of many floating population, the terminal operation system, and the view to the outside. In addition, the main programs were divided into two floors, with terminal facilities and passenger facilities on the ground level and a grand open space on the 1st floor, with a balanced mix of restaurants, exhibitions and retail displays. By doing so, we expected synergies from free interactions between unexpected programs. The rooftop was also equipped with an observation deck of stages, so that the view of the Han River could be viewed and various performances would happen at the same time.

Spatial experience in the terminal

As the main programs are located at the center of the space with two stories, visitors who use the main corridor experience the spaciously high ceiling space with spectacle interior perspective views together with river scenery outside . Also, like the exterior, the inner space is surrounded by a ceiling design inspired by the reeds and repeated slender vertical louvers, so you can feel the experience of walking through the reeds field. And, the curvilinear spatial arrangements around a large space influence to the free movement of the users in balance with the flow of the Han River.

The starting point of the multi-level interchange bridge is directly connected to the existing traffic system through the newly created paths in Yeoui-Maru and Ari Cultural Center area. Technically, from the starting point of the bridge, there is 1/130 slope toward the rooftop of the ferry terminal and a vertical pivot bridge is placed between the bridge and the terminal rooftop to cope with Han-River Water Level Change. The materials and shapes of the bridge are in consistency with the elevation of the main terminal.

The main objective of the arrangements is recovering the traditional riverside community. To realize it, alley, square and buildings are composed with public decks as the center. By virtue of the arrangements, views toward the riverside are still maintained through gaps between the distributed buildings. To complete the traditional nature – friendly environment, all the buildings’ roofs in the area are planed as grass roofs.

As a primary structure, Laminated Veneer Lumber wooden structure was chosen. The advantage of the material is light, durable and strong. Moreover, it has good control of noise, long span and good fire resistance. Based on the points, wooden structure is widely known as an alternate of steel structure. As sustainable endeavors in the project, wooden architectural materials reduce carbon emissions in the production process and the rotating vertical louvers on the facade can control solar irradiation for the energy efficiency. Finally, high efficiency low-e glass skylight with electric opening system can help natural ventilation, as necessary.